A passionate educator, Stephanie Gustafson is the Harp Specialist with Fort Bend ISD, where she works with over 30 students across six middle and high schools. She is on faculty at Blue Lake Fine Arts Camp, where she teaches private lessons and coaches chamber groups and the harp ensemble during the summer. Stephanie was a Young Artist with Da Camera of Houston from

2016–2018, which allowed her to teach in schools all across Houston. Through Da Camera, she held a year-long musical residency with the students of The Monarch Institute, a school for kids with neurological disorders and worked with the TREK program at Travis Elementary.

As a performer, she has been Principal Harpist with the Baton Rouge Symphony Orchestra since August 2015 and is a regular guest of the Houston Symphony and Louisiana Philharmonic Orchestra in New Orleans. She has also worked with the Austin Symphony, the Corpus Christi Symphony, and the El Paso Symphony and Opera. She is a founding member of the Lagniappe Trio (fl/vla/hp). Prior to her move to Houston in 2015, Stephanie lived in Washington DC where she was Principal Harpist with the Annapolis Symphony. In 2013, she worked with Maestro Kurt Nagano and the National Orchestra of Sweden before spending the 2013-2014 season as Acting Principal Harpist of the Filarmónica de Santiago.

Stephanie received her Master of Music from Manhattan School of Music and her Bachelor of Music from the University of Illinois Urbana-Champaign. She has written for Harp Column and has served as Secretary of the Houston chapter of the American Harp Society. She spends her free time chasing after her toddler son.

You can find more information about Stephanie here: stephaniegustafson.com

Naomi Hoffmeyer is Principal Harpist of both the California and Corpus Christi (TX) Symphony Orchestras. She has played Principal Harp in the Spoleto USA (SC), Atlantic (ME), New Hampshire, and Verbier (Switzerland) Music Festivals. She has performed as a 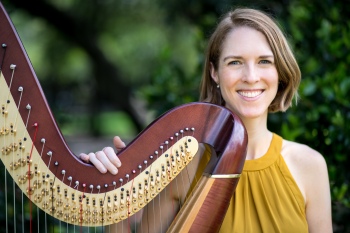 Naomi currently teaches private students at her home studio and in the Fort Bend ISD, and was a harp ensemble coach in the Fort Bend Regional Orchestra program in November 2017. She received her Master of Music and Artist Diploma Degrees with Paula Page at Rice University’s Shepherd School of Music, and also trained under Douglas Rioth and Ann Hobson Pilot at the San Francisco and New England Conservatories. In addition to her conservatory studies, she greatly credits much of her musical and personal development to her time spent at the Interlochen Arts Academy.

While maintaining an active musical schedule, Naomi is an enthusiast of the culinary arts and holds certification in Pâtisserie and Baking from the California Culinary Academy. She grew up in the Shenandoah Valley and spends her spare time hiking, knitting, and swing dancing.

You can find more information about Naomi here: naomihoffmeyer.com